Taxes for Teens: What Connecticut Parents Need to Teach Their First-Time Filers 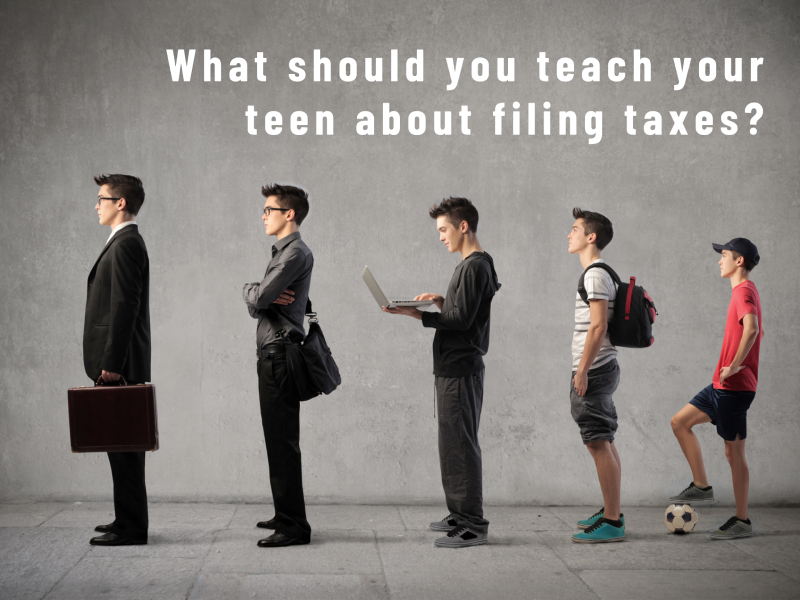 Last week I talked about smart ways to launch your financial life for young people.

And you know what is kind of hilarious? I forgot to talk about TAXES for teens.

So, I’m fixing that today.

Before I do: one more reminder that October 15th is the deadline for extended federal tax returns for 2020 (for the vast majority of the country). Which is another reason why it’s rather ironic that I forgot to mention taxes last week.

If you need a quick chat on this, grab time here:

And, of course, in that vein, let’s talk about taxes for teens. 🙂

You see, your children aren’t dumb — at least they keep claiming that. But would you let them drive a car without even one lesson? Of course not. So, why on earth (and speaking of claiming) would you turn them loose all alone on their first tax return?

Filling out the IRS Form 1040 when you’ve never done it before isn’t easy — taxpaying isn’t usually taught in school, despite IRS efforts — but you know what *is* easy? Making a mistake. And when you’re filing taxes, most mistakes don’t work in your favor.

So please, for everybody’s sake, start teaching your children about this stuff (and not just on Halloween with the famous “parent candy tax” — which I vigorously recommend, btw).

And of course, I have thoughts…

Taxes for Teens: What Parents Need to Teach Their First-Time Filers
“The difference between death and taxes is death doesn’t get worse every time Congress meets.” – Steve Forbes

Maybe you’ve forgotten what it’s like to face taxes for the first time. So, it might be hard to figure out what to share about taxes with your teen when they’re filling out that 1040 … a daunting task for a first-timer.

Some questions parents should share about taxes with their working teens:

?      How much money can you make before you have to file taxes?

?      How do you pay taxes if they’re not taken out of your paycheck?

Let’s use an example. Your child makes a go of their first real paycheck job and is long over the shock of seeing how much in taxes is taken out of their pay. And they now decide to file their first tax return themselves.

They decide this because a) you did an outstanding job as a parent and they’re a good citizen, and b) they heard they can actually get big bucks back with a federal refund.

Being a young person today, they head online to file their tax return. Lots of sites on the web let you file — and there are lots of places to ask questions, too … though few people do that enough (including, probably, your child).

Tap tap click click and voila! They’re done, most likely without you even realizing they were filing their own taxes.

Maybe you should have. It depends … literally because that “dependent” question on the tax form is just one that it’s easy to screw up the first time out. And it’s one that can impact you.

The parent trap with taxes for teens

See, you probably claim the child as a dependent on your own tax return, or you’ve arranged with your ex that one of you will (big tax tip: be very sure to keep this straight if you’re divorced).

But your child, with visions of that refund dancing in their head, plows ahead and checks the wrong box and takes themselves as a dependent. Then you file your tax return — and it gets bounced because the child can’t be your dependent, too.

Not only that, you lose the sweet four-figure federal break for the dependent and possibly such other goodies as college tuition deductions, child tax credits, and other education credits. In short, you can lose a lot on your taxes.

We can straighten out this dependent mess by amending the child’s return and then filing another return for you. This likely won’t even change the refund your child is getting — probably won’t even make an audit more likely down the road. Maybe.

I’ll add here that if you’re in a high tax bracket, it can be worth it for your children to claim themselves as dependents because any credits you get for them might be smaller; by claiming themselves, they might qualify for stimulus payments. It depends on, among other things, current stimulus and credit programs.

So, there’s one lesson when it comes to taxes: “Kid, always do the math.”

Everybody makes mistakes, and tax returns are a hotbed for them: the wrong deductions, lousy math, missing info, and misspelled addresses are some of the most common goofs. (Can you believe that some taxpayers actually misspell their own name?)

So, tell your child it’s okay to screw up once in a while, but they’d better make sure the mistake’s an honest one. The taxman forgives only so much…

(Here’s a lesson for you. Did you know that it doesn’t matter how old your teenager is when it comes to filing taxes for teens, only that they earned income? And taxable income can also be “unearned”? Yup. You’re never too old to learn.)

If any of this rings a warning bell, let’s talk.

Keep your head up,